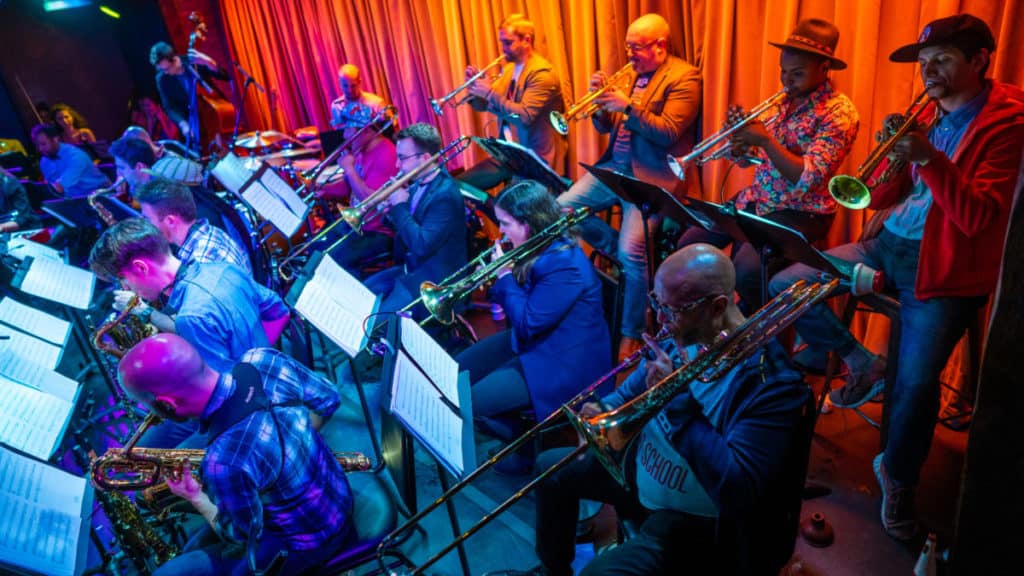 About The 8-Bit Big Band

The 8-Bit Big Band: The next level of Video Game Music. The 8-Bit Big Band is a genre-bending Jazz orchestra which was formed around the love of video games, their associated sound tracks, and the musical desire to explore and expand an ever growing contemporary body of music which they have lovingly dubbed “The Great Video Game Songbook”. They are a symphonic Jazz orchestra of over anywhere between 17-33 of New York City’s finest musicians re-arranging beloved music from the video game sound tracks of the last 30 years into genre fusing contemporary large ensemble music. Formed in 2017 with the release of their debut album “Press Start” followed by their sophomore album “Choose Your Character” in 2018, and most recently “Backwards Compatible” in 2021. Since the inception of the band they have garnered an online following aggregating over 20 Million views on YouTube, and over 200,000 subscribers, followers, and listeners across the globe, selling out concert venues in NYC.

Their mission is to showcase the contemporary and ever growing body of musical work that is Video Game Music. In the past, people grew to love the songs of “the Great American Songbook” because of their experiences seeing the Broadway shows and films those timeless songs and melodies came from. In a similar way, video game music has ushered in a new era of appreciation from music lovers who grew up playing video games and learning to love the melodies from their favorite famous game franchises. Within this contemporary musical canon exists a wide array of communally recognizable themes, lyrics, and melodies that can be reimagined and expanded upon in new and inventive ways in the same fashion that the great arrangers and jazz musicians of the past century would treat other highly regarded bodies of musical works such as The Great American Songbook, Film Scores, Broadway Cast Albums, and more.

The 8-Bit Big Band draws their music from some of the most beloved video game franchises of all time such as Mario, Zelda, Sonic the Hedgehog, Kirby, Metal Gear Solid, Final Fantasy, Tetris, Yoshi, Fire Emblem, Pokemon, Portal, and many more, dedicating themselves to bringing large ensemble arranging into the presence of the internet and gaming era while giving the music from these games the same reverential treatment in arranging, performance, and production that has gone hand in hand with the large symphonic studio jazz orchestras of the past century and beyond.