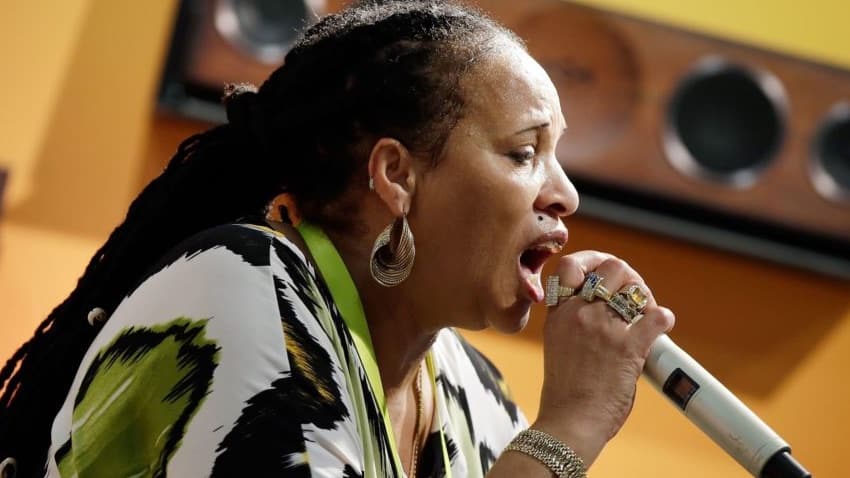 DJ Gravy is a musician, selector, publisher and an og new yorker who represents the diversity of where he’s from. Whether he’s DJing a concert, festival or a launch event for a global brand, Gravy’s encyclopedic knowledge of music, flawless turntablist precision and infectious high energy, creates waves from the hood to the Hamptons.

Gravy’s events have been attended by Mick Jagger, Scarlett Johansson and Jay Z and have been described as a ‘frenzy’ by Rolling Stone magazine. He’s DJ’d alongside Diplo AND Questlove and performed on stage with too many hip hop, reggae and soca legends to mention.

In 2007, Gravy founded Rice and Peas, a unique event series that dramatically influenced the downtown nightlife circuit, trickling dancehall into the cutting edge scene, ultimately helping to bring the genre back to the mainstream. Shaggy, Wayne wonder and Beenie man have all performed at it while Damian Marley and Sean Paul have attended.

Gravy’s media outlet and agency, largeup.com, is partnered with Apple music, Red Bull and several Caribbean tourism boards, having produced the first Caribbean music showcases at SXSW and WMC along with special events at Central Park Summerstage, Lincoln Center and the Surf Lodge.

Regarded as the first female star in the male-dominated world of Jamaican dancehall, Sister Nancy continues to blaze new trails 35 years after the release of her first and only album. Recently recognized by Pitchfork as The Best Dancehall Song of All-Time, “Bam Bam” has been sampled, quoted and referenced in tracks by Lauryn Hill, Wiz Khalifa, Too Short, Kanye West and Jay-Z. Its ethereal and inherently cinematic tones have made it a popular choice for films, too, leading to memorable scenes in 1998’s Belly and Seth Rogen and James Franco’s The Interview (2014).

Born Ophlin Russell, Nancy grew up in Kingston, Jamaica’s Papine district, in a large family that included dancehall pioneer Brigadier Jerry. Her familial ties afforded her an opportunity granted few, if any, Jamaican girls at the time: To deejay (or chat) songs on sound systems, the local DJ crews that form the backbone of dancehall culture. After learning of her talents from artist General Echo, Winston Riley of Kingston’s storied Techniques Records label brought her into the studio to record her first single, “Papa Dean,” in 1979. Returning to the studio to complete what would be her first and only album, One Two, in 1982, Nancy lent her voice to a haunting, minimalist version of Riley’s Stalag riddim, a popular instrumental track voiced by countless artists since 1973. Coopting a lyrical refrain (“Bam bam bi lam, bam bam, what a bam bam…) from Toots & the Maytals’ identically-named 1966 hit, Nancy created an anthem of female empowerment, repurposing the skepticism she encountered as the lone woman on the sound system circuit into a supremely-confident mission statement.