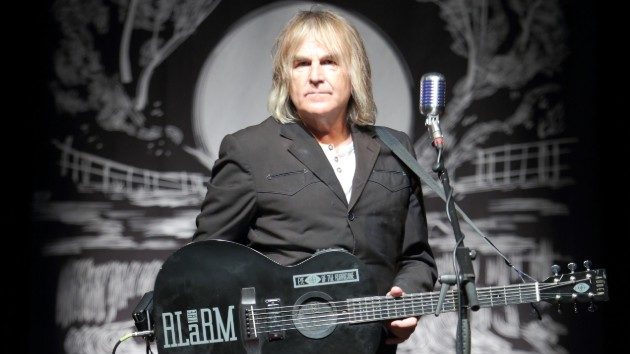 At Sony Hall on Saturday April 18th 2020, Mike Peters will honour The Alarm’s late ‘80s trilogy of iconic albums, Eye Of The Hurricane, Electric Folklore and Change, with performances of some of The Alarm’s most famous songs such as Rain In The Summertime (1987 – international Top 20 hit which was recently covered by both The Killers and also by Smashing Pumpkins’ Billy Corgan at The Alarm’s Cleveland, Ohio show last August) and Sold Me Down The River (1989 – a US No.1 Rock Song), alongside a host of Alarm standards such as Rescue Me, Strength and Spirit of ’76 as captured on the 1988 live album ‘Electric Folklore’.

This one man Mike Peters / Alarm show, will be performed using electro-acoustic guitars, drums, narration and special effects to create a unique concert experience perfectly suited to Sony Hall’s extensive multi-dimensional audio system, that can create a music environment where the performance of the artist actually surrounds the audience, making Sony Hall – the best place possible, to experience the Hurricane of Change performance as created by Mike Peters.

Thirty years ago, as Mike Peters undertook a creative songwriting journey through the heart of his home country – Wales – the Berlin Wall would fall and Europe and indeed, the rest of the world, would plunge into a period of enormous and seismic change. Caught in the middle of this political maelstrom, Mike Peters with his band The Alarm would record the albums ‘Eye of The Hurricane’ (1987), Electric Folklore (1988), and ‘Change’ (1989) each of which would, in their own way, capture the essence of these most turbulent times.

“I have always thought of these three albums as an Alarm trilogy”, says Mike. “A lot happened to the band and the world, during the writing and recording sessions from 1987-1990. As one decade bled into another, the themes of response and resolve to contend with uncertain times are running through the core of each and every album. Played together, these songs tell their own story and, with the tumultuous times Europe and the USA can expect to face in the coming months and years, are still as relevant today as when they were first written.”