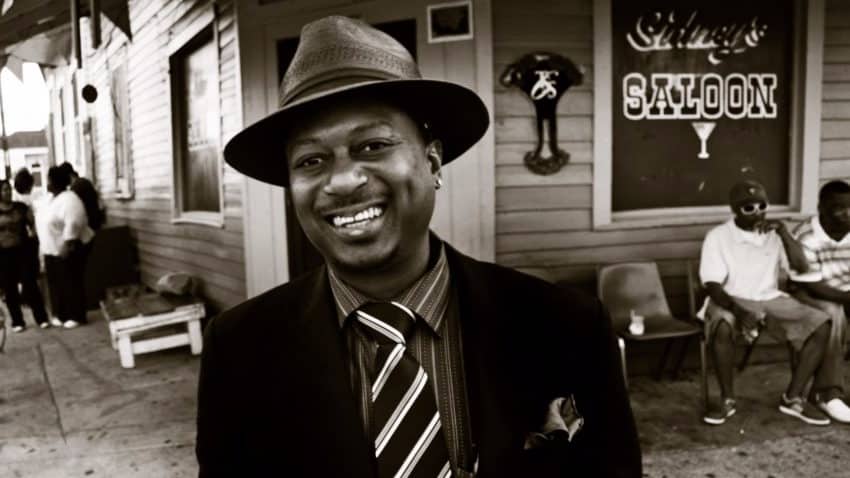 About Kermit Ruffins and the Barbecue Swingers

From playing himself in the HBO Series Treme, to barbecuing outside his bar, Kermit’s Treme Mother-in-Law Lounge, to sitting in with Jon Batiste and Stay Human on The Late Show with Stephen Colbert, the trumpeter/vocalist keeps himself busy when he isn’t on stage doing what he does best—entertaining and sharing his love of life with the world. Ruffins continues making his imprint on the world with wider exposure including appearances on Bravo’s Top Chef and on the soundtrack to Disney’s Jungle Book with Bill Murray and Christopher Walken. He personifies the laid-back vibe of New Orleans.

But he did not come by his gifts easily. Ruffins did his homework and developed his stage persona and musical act by studying artists who came before him. He watched videos of Louis Armstrong and Cab Calloway until the tape wore out, cut his teeth busking the streets of the French Quarter, and apprenticed on stages with local legends “Uncle” Lionel Batiste and Danny Barker.

Now, Kermit Ruffins and the Barbecue Swingers are a beloved institution – a must-see for every New Orleans visitor and a favorite of local critics and music lovers. As he’d helped spur the formation of new brass bands in his 20s, he’s since influenced the city’s musical direction in the 21st century.

Whether he’s slinging barbecue, adding to his collection of fedoras, or playing at one of his regular weekly shows, Kermit Ruffins does it with joy and passion, an example of what it means to be a true New Orleanian.

About Olivia K & The Parkers

Brooklyn-born Olivia K calls her unique sound Soul Fusion. Just like the melting pot of NYC, soul fusion includes the fun and rhythm of the Caribbean, the sincerity of gospel, and the artistry of jazz to bring people together. It’s a music full of soul, passion, inspiration, and fun.

Olivia electrifies the stage as a singer and performer in non-stop motion, singing, dancing, and  accompanying herself on piano at the Bitter End, collaborating with the Songwriter Orchestra at the New School, 54 Below and Le Poisson Rouge or with her group Olivia K and the Parkers at The Delancey, Rockwood and the Knitting Factory.