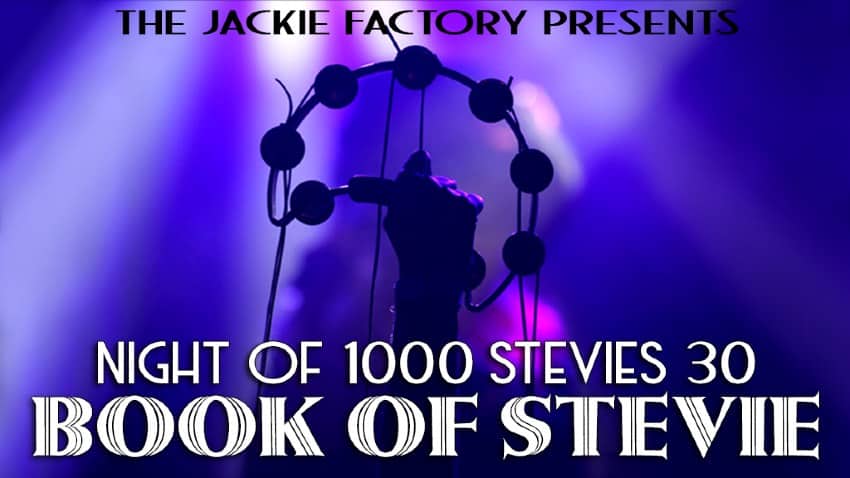 About Night of a Thousand Stevies

NIGHT OF 1000 STEVIES – the largest and most beloved STEVIE NICKS fan event in the world – will take flight for its thirtieth annual edition at the magnificent SONY HALL on May 8. NIGHT OF 1000 STEVIES 30: BOOK OF STEVIE is produced by show founders CHI CHI VALENTI and JOHNNY DYNELL and their creative krewe at THE JACKIE FACTORY. Neither a contest nor a karaoke show, NOTS is the Stevie Nicks celebration ne plus ultra – a riot of shawls, lace, baby’s breath, twirling, tambourines and great performance.

The producers also continue their tradition of including new Stevie Nicks interpretations in every edition of the show. This year our first debut will come from Ireland’s VIKKI MARTIN, lead singer of Europe’s only Nicks tribute STANDBACK THE STEVIE NICKS EXPERIENCE (DUBLIN). The search is underway for our final three debut performers or ensembles – write to jackiefactorynyc@gmail.com before 3/1 for the application guidelines.

As epic a tribute to Nicks’ musical gifts and stage mastery as NOTS is, it equally showcases “STEVIE STYLE” – the iconic Stevie looks from handkerchief hems to fringed shawls and adorned top hats. Though dressing up isn’t mandatory, it is practiced by most attending. As always, NOTS 30 will climax with the iconic “Battle of A Thousand Stevies” finale and tambourines will be tossed to the Enchanted audience through the night.

Over the past three decades, NIGHT OF 1000 STEVIES has featured celebrated performers including DEBBIE HARRY, JUSTIN VIVIAN BOND, BOY GEORGE, BASIL TWIST, CYNDI LAUPER, VANGELINE THEATER, THE CRYSTAL ARK, JOEY ARIAS, LEA DELARIA and many more. Born in 1991 at the tiny performance venue MOTHER at JACKIE 60, NOTS and its passionate audience inspired the feature film GYPSY 83 and even a “Jeopardy” question. It has launched generations of “Legends of Stevie Realness” across the U.S. and worldwide. Since 2019 the Jackie Factory also produces a second annual edition “NIGHT OF 1000 STEVIES NEW ORLEANS” in winter at the French Quarter venue ONE EYED JACKS.