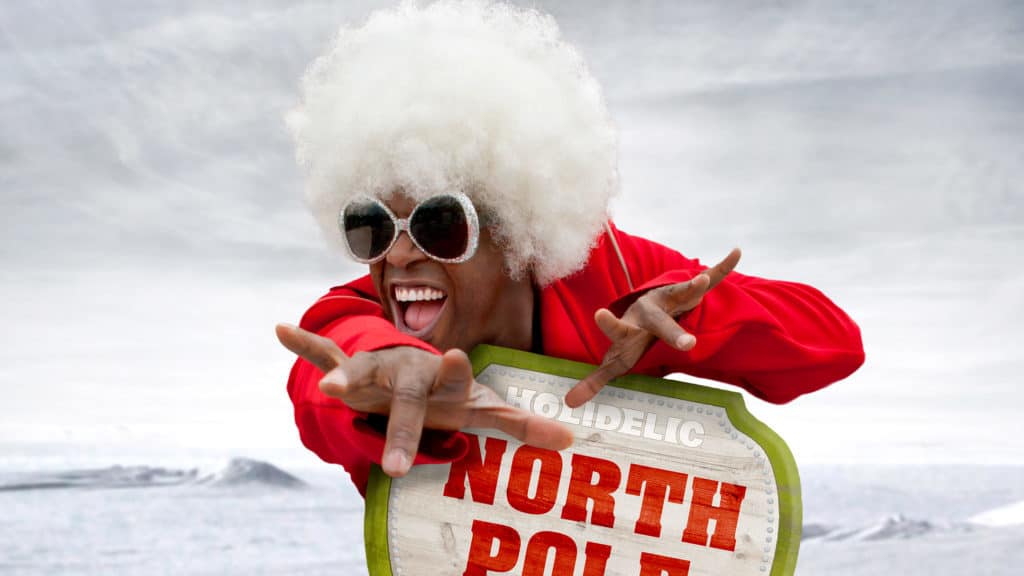 Holidelic will shake you free of the Andy Williams and Nutcracker rut. Written, produced and directed by Grammy-nominated singer/songwriter, producer, actor and dancer Everett Bradley, Holidelic debuted in 2002 at New York’s prestigious Joe’s Pub—part of New York’s Public Theater and Shakespeare Festival—and has sold out night after night since the beginning. Bradley is now taking the show on the road, bringing the magic, the mirth, the mayhem and the memories to theatres and performance venues throughout the Northeast. Now entering it’s 9th season, this holiday funk-tacular blends the influences of P-Funk, Sly Stone and other 1970’s and ‘80’s funk and soul bands into original songs that celebrate diversity, mild familial seasonal dysfunction, individuality, and holiday booty shaking. This is a show for all races, creeds and lifestyles… even for all ages with a little parental guidance!

“A flashy, bass-heavy retro-futuristic take on the holidays.” The New Yorker

Holidelic was conceived of as a celebration of the true holiday spirit of joy and giving, and since its inception in 2002, performances have featured a range of artists from Living Colour’s Vernon Reid, The B-52’s Fred Schneider, SNL’s Shawn Pelton and hip hop artist John Forte to pop chanteuse Lucy Woodward, dancing trombonist Jonathan Arons, and the legendary Celeste Holm. Holidelic performances outside of the metro New York region will feature an array of local celebrities and talent, making each performance a unique event.

“Not since James Brown’s Christmas Album has there been a Yuletide-themed collection as funky as this latest release from Grammy-nominated singer/songwriter/actor Everett Bradley (Broadway’s Swing). Featuring mostly original songs as well as very loose adaptations of Tchaikovsky, “Frosty the Snowman,” “Little Drummer Boy” and the like, Holidelic is a relentlessly fun and joyful disc that recalls the glory days of George Clinton’s Parliament/Funkadelic.”Frank Scheck (New York Post / Hollywood Reporter)

This is holiday spirit like you’ve never seen it before! Holidelic explores the holidays, modern culture and mild family dysfunction in a playful, loving, humorous performance that is hardly traditional but a whole lot of fun! Celebrating uniqueness and diversity with the power of the groove as his common denominator, Everett Bradley’s fresh, wide-eyed look at the holiday season has rejuvenated thousands of bah-humbug spirits. As the standard holiday fare has passed from one generation to the next like a stale fruitcake, it has lost a lot of relevance for many… and as the ubiquitous, canned holiday music oozes from nearly every storefront from late November’s Black Friday celebration of commercialism ‘til Christmas Day, it is harder and harder to get people enthusiastic for yet another round of Jingle Bells, White Christmas and The Little Drummer Boy. People want to celebrate! People want holiday cheer! People want to shake their booties! Holidelic is the guaranteed antidote to the sameness of old school holiday programming– an opportunity for parents and kids of all ages to cut loose to an infectious groove, sing and laugh together in celebration.

Everett Bradley—aka Papadelic—knows how to put on a show. The first American to perform with and direct the British percussive sensation “STOMP,” he was also the co-writer, co-arranger, Theatre World Award winner and star of the hit musical, “SWING,” which won a Tony Award and was nominated for a Grammy for Best Broadway Cast Recording. Everett has toured and recorded with giants like Bobby McFerrin, Jon Bon Jovi and David Bowie. He is currently a member of Bruce Springsteen’s E Street Band, a member of Hall and Oates‘ touring band, Carly Simon’s musical director, and the musical director of Our Time Theatre Company– an artistic home for young people that stutter– where he teaches singing, drumming, and songwriting techniques. From it’s opening night until recently, he was a member of the cast of Wynton Marsalis‘ Broadway tribute to Duke Ellington, “After Midnight”, but he left to become the music director for the new NBC daytime show “The Meredith Vieira Show”, which debuted September 8, 2014.